‘Railbound buildings’ are small functional structures that typically house technical services for railway networks. Assigned by ProRail, manager of the main railway network in the Netherlands, we designed a new modular façade that discourages graffiti.

The design uses brick as a its main ingredient: a sustainable, robust, cheap and flexible building material this withstands weathering and is a material already present throughout the railway network. Based on mockups, we modulated a standard stepped or patterned façade. Its plinth is recessed, yielding a shadow and making it harder to access with a spray-can. The crown of the façade is hardly ever sprayed, because it is too high, here it instead works as a deterrent for paint rollers by extending bricks beyond the façade line. The third step prevents graffiti on the most vulnerable part of the façade. Here, a Brazilian bond opens the façade, so no paint can be holistically applied. By extending the remaining bricks, a graffiti artist would have to spray in weird angels making it impossible to paint a recognisable image.

The elaboration of these principles result in a pronounced but restrained object, built up of bricks in subtle color and bond variations. It is robust and fits with the railway landscape, but also variable and refined, different from every angle, distance, weather type and season. 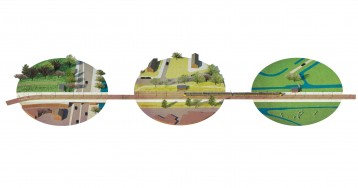 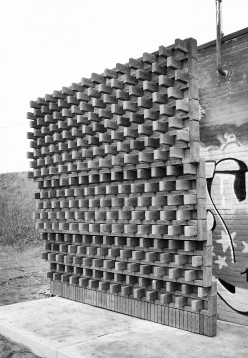